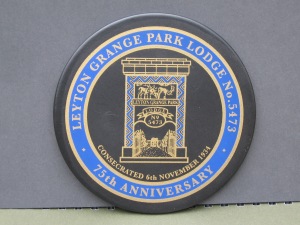 Our Lodge History in Brief

Many enthusiastic Masons attended and the idea to form a new Lodge was conceived when it was realised that many of them had little chance of making progress in their Lodges due to the present high membership levels. It was agreed that a Committee be appointed with a view to obtaining permission from Grand Lodge to form a new Lodge.

A petition to Grand Lodge was sponsored by Leyton Lodge (2626) and was successful, on the 2nd May 1934 the Warrant for Leyton Grange Park Lodge No. 5473 meeting at the Masonic Hall, Leytonstone, London.

The name of the Lodge was a subject requiring considerable thought and in view of the fact that the idea of a new Lodge originated at the meetings in Grange Park Road, it was finallt decided to call the Lodge, the Leyton Grange Park Lodge.

The question of a Motif or Badge appropriate to the name arose. The old Mansion “The Grange” was suggested, but a search at the library could reveal no trace of any photograph or print which could be used at that time. Bro. William Arthur Lewis designed the emblem, as shown above and on each page, which was eventually adopted.

Subsequently the Leyton and Leytonstone Historical Society discovered the Plan and Elevation of the house which had appeared in the third volume of Vitruvius Britannicus (or the British Architect), from a drawing by Colin Campbell and engraved by H. Hulsbergh and published in 1731.

In 1936 the Lodge Banner, which was Hand Made by Bro William Arthur Lewis, was presented to the Lodge and was dedicated by Bro. Rev. Cannon Brown, M.A. PAG Chaplain.

We still use the original banner at every lodge meeting.

Over the years the lodge has been given honors following donations to various Masonic Charities. The status granted have been as follows.

We are twinned with the Rosslyn Lodge no. 102, U.G.L.Q. Australia